WOMEN AND THE MACHINE: Representations From the Spinning Wheel to the Electronic Age (Johns Hopkins University Press)

reissue as BREAKING FRAME: Technology, Art, and Design in the Nineteenth Century

The fantasy of a male creator constructing his perfect woman dates back to the Greek myth of Pygmalion and Galatea. Yet as technology has advanced over the past century, the figure of the lifelike manmade woman has become nearly ubiquitous, popping up in everything from Bride of Frankenstein to The Stepford Wives to Blade Runner II and Ex Machina. Now Julie Wosk takes us on a fascinating tour through this bevy of artificial women, revealing the array of cultural fantasies and fears they embody.

My Fair Ladies considers how female automatons have been represented as objects of desire in fiction and how "living dolls" have been manufactured as real-world fetish objects. But it also examines the many works in which the "perfect" woman turns out to be artificial—a robot or doll—and thus becomes a source of uncanny horror.

The innovative book with its wide ranging examples of simulated women draws upon Wosk's own  early experiences as a young female Playboy copywriter to show how images of the artificial woman have loomed large over real women's lives. Lavishly illustrated with film stills, photographs,  and vintage advertisements, this book offers a fresh look at familiar myths about gender and technology.

From sexist jokes about women drivers to such empowering icons as Amelia Earhart and Rosie the Riveter, representations of women and machines have celebrated and satirized women and their technical abilities. Depictions of women as timid and fearful creatures baffled by machinery have alternated with images of them as being fully capable of technological mastery and control―and of lending sex appeal to machines as products.

In Women and the Machine, historian Julie Wosk maps the contradictory ways in which women's interactions with―and understanding of―machinery has been defined in Western popular culture since the dawn of the Industrial Revolution. Drawing on both visual and literary sources, Wosk illuminates popular gender stereotypes that have haunted  women throughout modern history while underscoring their advances in what was long considered the domain of men. Illustrated with more than 150 images.

Engaging and entertaining... Using illustrations, cartoons and photographs from the past three centuries, Wosk delineates shifts in social acceptance of women's relationship to technology. Typewriters, spinning wheels, sewing machines and household appliances are all given their due, as are bicycles, cars and airplanes. But there are intriguing asides, too, like the technology of women's corsets, bustles and hoops... With the sleek detail of a gift book, Wosk's history... is complex, comprehensive and highly readable.

In this incisive, abundantly illustrated study, Julie Wosk explores for the first time how the visual arts reflected the explosive psychological impact of the Industrial Revolution on English and American society. Wosk reveals the ways artists and designers responded to the hopes and fears for the first industrial age, and how their work continues to illuminate our own visions of technology and culture.Wosk also reveals the striking ability of artists to capture the drama and the dangers of the new technologies, seen in their images of factories spewing smoke, steam boilers bursting, trains crashing, and comic views of people-turned-automatons. Their art dramatically mirrored widespread feelings of disorientationÐÐthe phenomenon sociologists have called "breaking frame. Wosk also demonstrates the startling impact of new technologies on the decorative arts and industrial design. 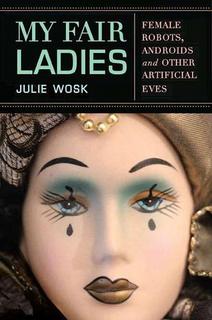 [SAMPLE, delete by going to "My Works"] Applications of string theory.

Order Playboy, Mad Men, and Me on Amazon.com

REFERENCES:  ARTICLES AND BLOGS ON TECHNOLOGY, GENDER, FILM, AND ART

"The Off-Broadway Play "Marjorie Prime" and Today's Technologies: Talking Robots That May Someday Keep Us Company (and Make Us Immortal Too). Huffington Post, January 18, 2016, updated January 17, 2017.

"Perspectives on the Escalator in Photography and Art." Catalogue essay for the exhibition catalogue  Up Down and Across: Elevators, Escalators, and Moving Sidewalks.  Washington, D.C.: National Building Museum/Merrell Pub. Co., 2003: 140-171.

"The Electric Eve: Galvanizing Women in Nineteenth and Early Twentieth Century
Literature, Film, and Art." Research in Philosophy and Technology 13 (1993): 43-56.

"The Impact of Technology on Art and Art on Technology: A College Course Design," in The State University of New York, The New Liberal Arts--Curriculum in Transition (Albany: State Univ. of New York, 1986): 67-71.

"Humanities and the Machine: Responses to Technology." Technology and Culture ( July 1982): 435-38. (Report on the State University of New York Conversations in the Disciplines Conference held at SUNY Maritime College, 1981.)